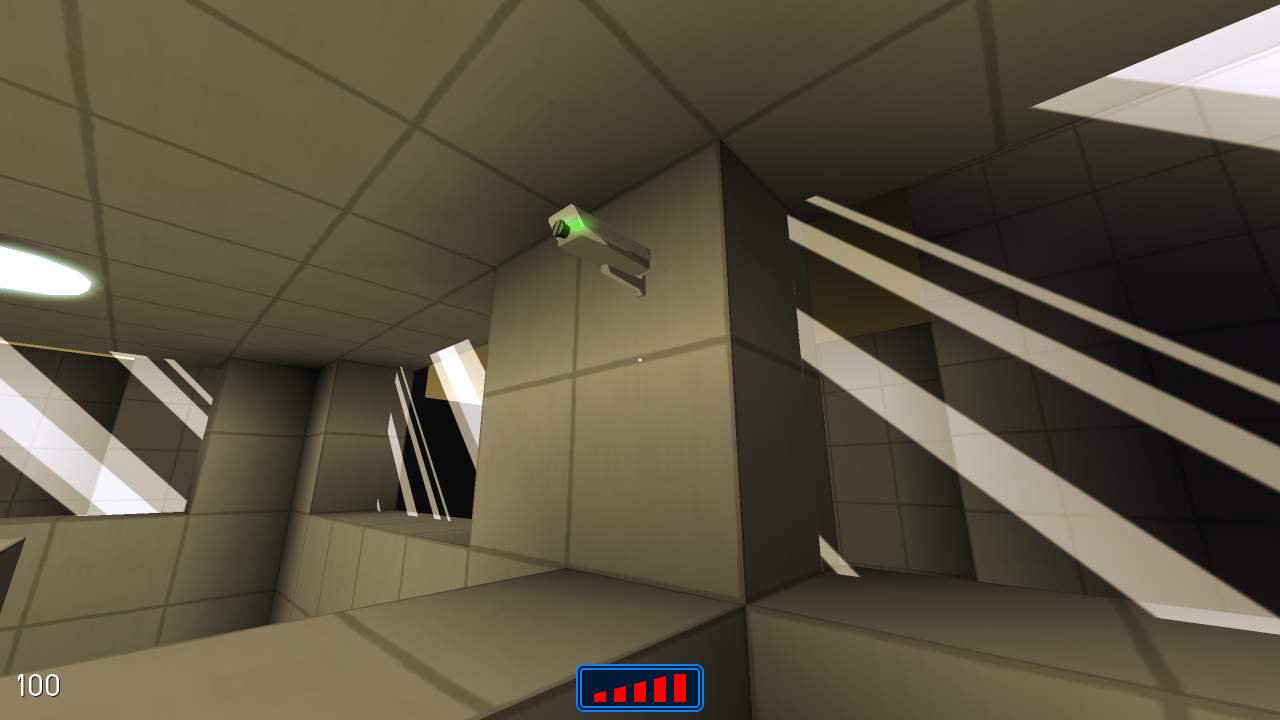 As described in last week’s update, I’m developing three levels for a vertical slice milestone: two stealth missions and one interstitial “social” space (where the player can rest up, shop for gear, and pull narrative morsels from NPCs or news terminals).

The first of the stealth missions is now playable end-to-end. This level is sequenced near the start of the game, and has a somewhat more linear or strictly gated flow than I intend for later levels. I chose it for inclusion in the vertical slice for that reason (among others), as it forced me to frontload some scripting work I might have otherwise delayed. Level-specific scripting is a new experience in this engine; Eldritch had a modicum of scripting in its library hub, but its procedurally generated levels precluded traditional level scripting. It turned out to be straightforward to implement scripts using the existing event and component systems, anyway.

Sadly, I already broke my rule from last week by implementing a sequence in which the player is required to take an “optional” phone call to progress. There is a strong narrative justification for it, and it occurs at a moment when it cannot possibly interrupt any ongoing gameplay; but I still feel like I’m betraying some core value of systemic games in doing it. I expect this won’t be the last cognitive dissonance I feel as I reconcile this game’s narrative needs with systemic liberty. C’est la vie. 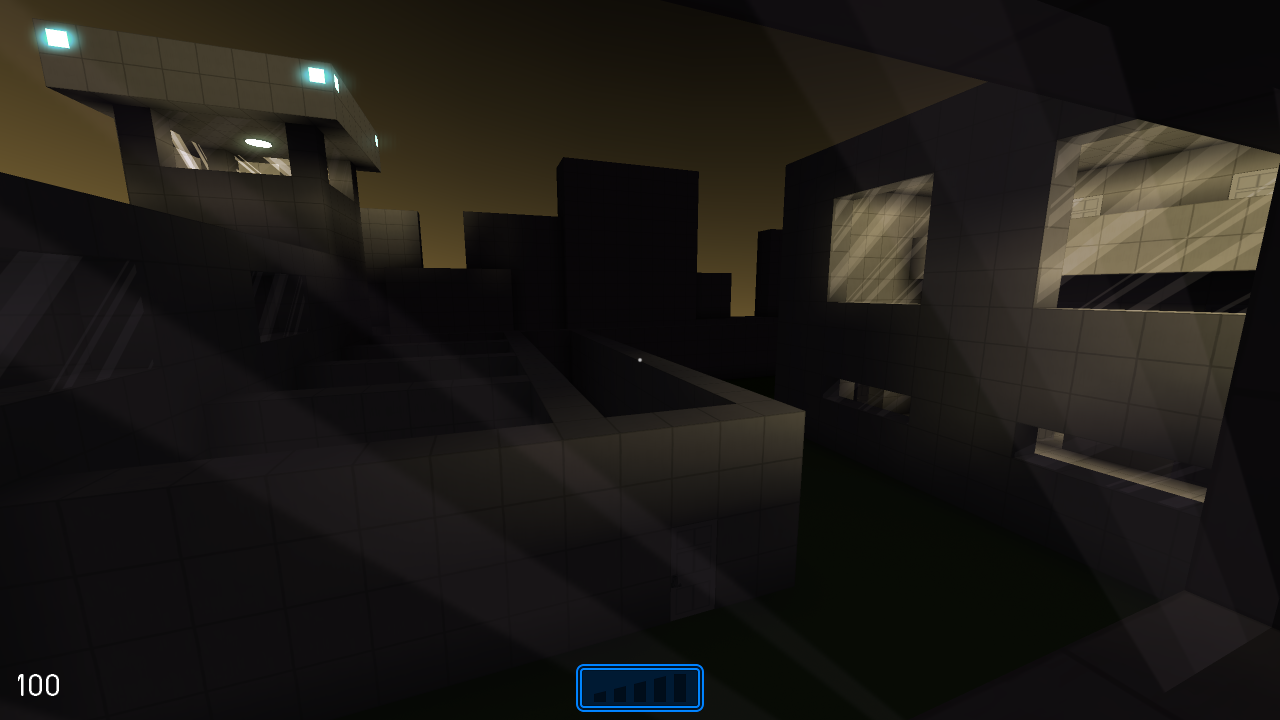 One of the practices I’ve borrowed from AAA games is rigorous scheduling toward regular milestones. My self-imposed deadlines on Eldritch helped me manage the scope of that game and ship it ahead of schedule, and I aim to be equally disciplined in the development of Die Augen der Welt. To that end, I have given myself a deadline of May 31 to complete a “vertical slice”, a demonstration of all (or most) of the game’s systems in a representative level.

Sometimes in AAA game development, a level will be built specifically for the vertical slice, especially if the milestone build may serve the additional purpose of being taken to trade and press events to demonstrate the game. (This is one of a few reasons viewers may see early footage of maps which wind up absent from the final game.) But the schedule for Die Augen is ambitious, and I don’t expect to have time to make a throwaway map, or even to redo the work done during this milestone period. What I build this month needs to be something I can ship next year.

Until just earlier this week, I’d only had a loose idea for the player path and narrative structure of the game. But with the vertical slice milestone looming, I needed to select which level (or levels) to build; and that meant figuring out what all the levels would be. It stresses me out a little, committing to something as fundamental as the master list of levels in a game. The sequence isn’t immutable, but other decisions will be built on top of it. The cost of changing any of these assumptions will continue to grow from here. But it was a good exercise. I charted out the game from intro to ending, selected the vertical slice levels, found and resolved some narrative discrepancies, and got excited all over again about what I’m going to spend the next 6-8 months making.

I chose to develop a contiguous sequence of three levels from the first half of the game: two missions and one non-combat interstitial space. (The screenshot at the top of this post is the blockout for the first of these missions, after two days of planning and building.) Trying to build three maps in one month may be too aggressive, but I’ll need to know that so I can scale the rest of the game accordingly. 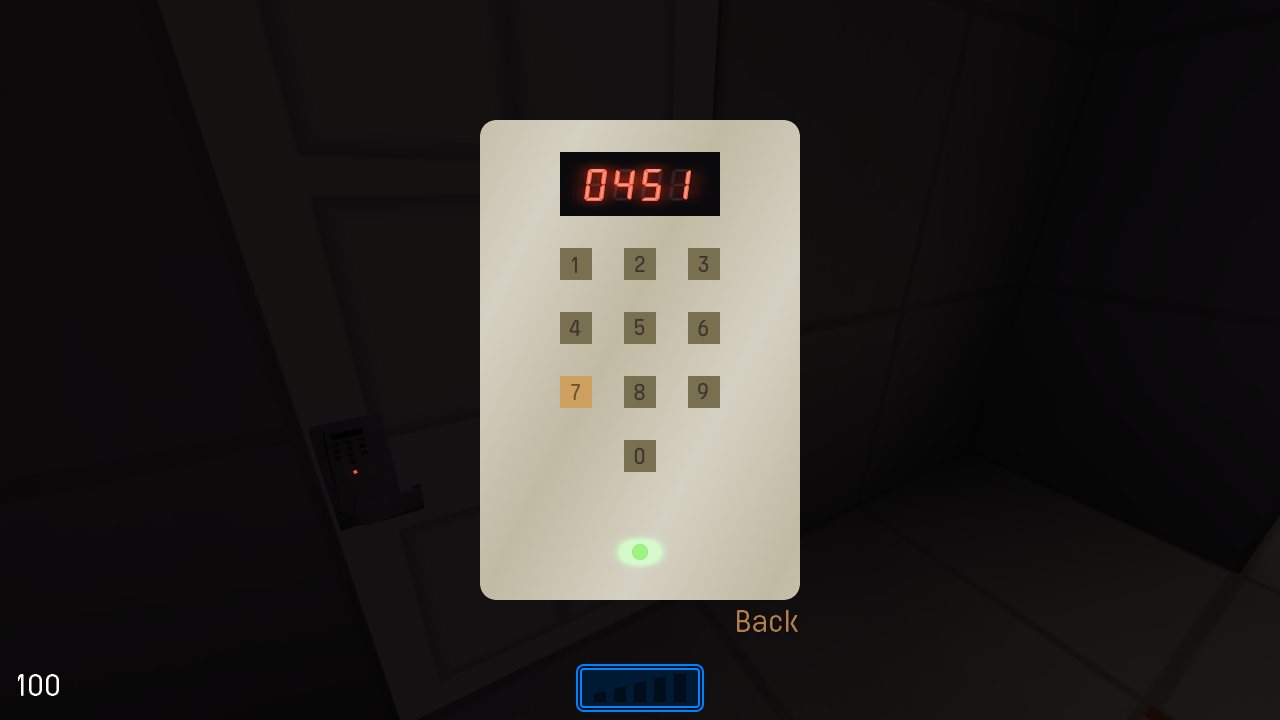 I felt more productive than usual this week. In addition to level planning and building, I implemented a few small features that will be needed for the vertical slice. Locked doors may now have numeric keypads, as an orthogonal entry system to swiping a keycard or hacking the lock. On the tools/editor side, I created an easy interface to wire switches to any number of doors, lights, or other electric objects.

I also added an “incoming call” mechanic where the player can choose to take a phone call during a mission and enter a conversation. Not the most exciting thing in its own right, but it implies an unusual choice and constraint about the writing in this game. Die Augen won’t have voice actors talking in the player’s ear during gameplay. All dialogue will be delivered through the conversation interface. And because the conversation interface is modal (i.e., it pauses the game and blocks all other interaction), I want most dialogue to be opt-in and skippable. If the player doesn’t want to stop playing the game to talk to someone, that’s a valid choice. And if the player chooses to ignore a conversation, they shouldn’t miss anything critical (e.g., a door keycode or a primary objective). This might lead to strange cases later where the dialogue assumes a prior conversation took place when in fact the player skipped it; but I’m betting that the players who skip the former conversation are likely to skip the latter as well. 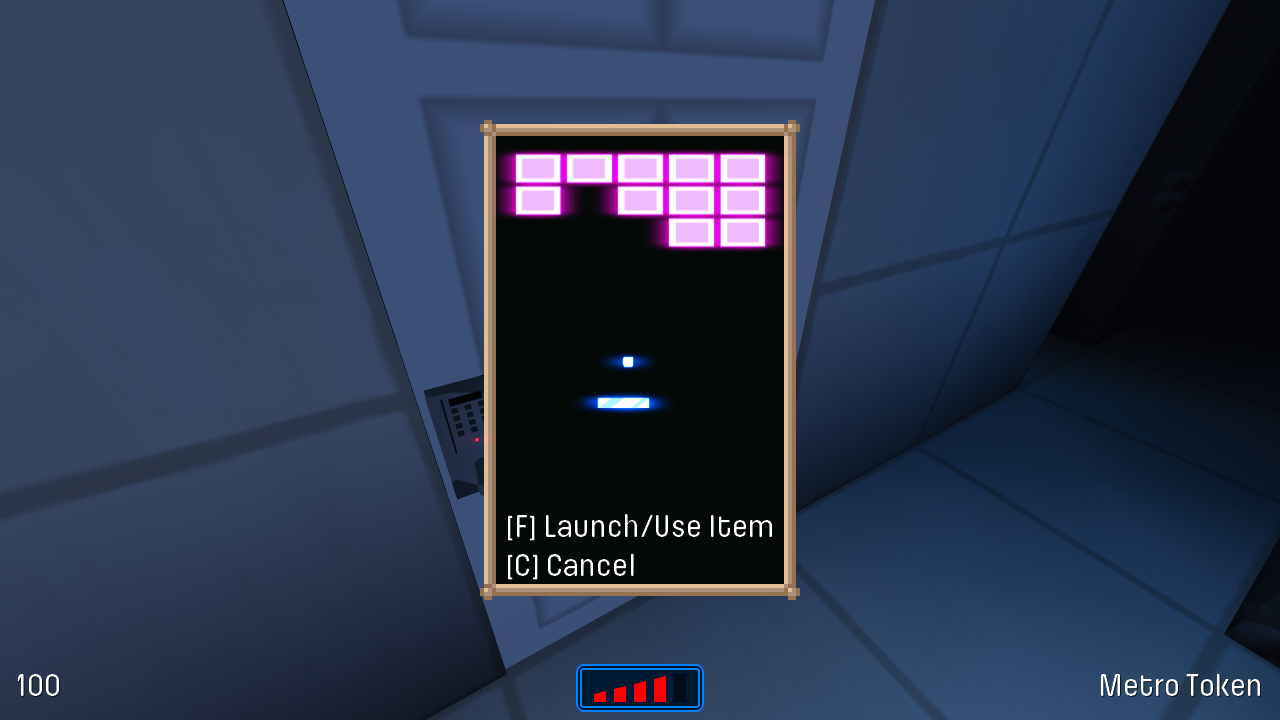 The last couple of days, I’ve been implementing a Breakout-style hacking/lockpicking minigame.

When I started thinking about doors and locks in Die Augen der Welt, I realized that a lockpicking minigame based on a pin tumbler lock wouldn’t be thematically appropriate. Die Augen‘s world is a slightly futuristic alternate timeline version of our own world, so I imagined that most secure facilities would use electronic locks instead of mechanical locks. This meant I could develop a single minigame to be used for both lockpicking and hacking, because they share the core premise of unauthorized entry into an electronic system.

Although I couldn’t utilize the affordances of mechanical lockpicking, I wanted a minigame which modeled breaking into a secure system, at least in an abstract way. For inspiration, I talked to friends and looked at reference from hacking interfaces in other games. The node control minigame in Deus Ex: Human Revolution was a favorite for a few reasons: it was tense and fast-paced, it modeled the domain in a clever way, and it had room for player growth and expressive play. I wasn’t sure I could afford to develop and iterate upon a completely original minigame like DXHR did, so—validated by BioShock‘s appropriation of Pipe Mania—I looked for classic games I could repurpose as a hacking minigame.

My first idea was a sort of Tetris puzzle mode where the player would have to clear the board using a fixed number of pieces. In a very abstract way, the fixed bricks would represent firewalls and the falling pieces would be some sort of software to bypass them. But that sort of puzzle was more prescriptive than I wanted. There is generally only one correct way to solve them. And designing interesting and unique puzzle boards for each locked door or hackable machine in the game would be an additional burden.

I liked the simple, abstract affordance of breaking through literal barriers with a piece of software, which led me to my second idea: a version of Breakout where the goal is not to clear every brick but simply to get the ball to the far end of the board. In a way, this is a more intuitive model of breaking into a system, poking holes in each consecutive barrier. It fits my needs for the scope of the minigame, as boards can be both rapidly developed and reused. And it offers the possibility for some player growth or expressive play, if I choose to add Arkanoid-style power-ups.

The first pass implementation is completed, but the pace of this minigame needs further testing and iteration later, in the context of real levels with proper lighting and AIs on patrols and such. The main world simulation (physics, AIs, etc.) continues to run while the player performs a hack, so she may be discovered if she takes too long. This increases tension, but also requires that the minigame be able to be completed in a timely fashion. (I also believe it is generally desirable for hacking and lockpicking minigames to be brief because the player may play them dozens or hundreds of times over the course of a game, and these minigames can feel like a chore when they take a lot of time to complete.)

“Die Augen der Welt” is German for “the eyes of the world.” It is pronounced /diː ˈaʊgən deːɐ̯ vɛlt/ (or approximately dee OW-gən day-ə velt for English speakers).

Hi, I’m David Pittman. In 2013, I co-founded Minor Key Games and released Eldritch. Last month, my brother Kyle announced that MKG’s next release will be his 8-bit throwback Super Win the Game. And recently, I’ve been teasing my own next game on Twitter.

One of the biggest lessons I learned from Eldritch was the value of marketing. I played that game very close to the chest and waited until it was virtually finished to announce it. I felt I couldn’t afford to divide my time between development and PR, but I was also simply scared that something would go terribly wrong and I wouldn’t be able to finish the game after all. This time around, I aim to be open and transparent about what I’m making.

I’m starting this blog with the intent of providing updates every week or so. Some weeks, I might share an in-depth exploration of a topic I’ve been wrestling with; other weeks, just a brief summary of recent developments.

For now, I’ll provide a brief overview of what I’m planning for the game (with the usual developer caveat that much of this currently exists only in idea space and is subject to change):

Thanks for your time! And if you have any questions about Die Augen der Welt, hit me up on Twitter at @dphrygian or send me an email at [email protected].