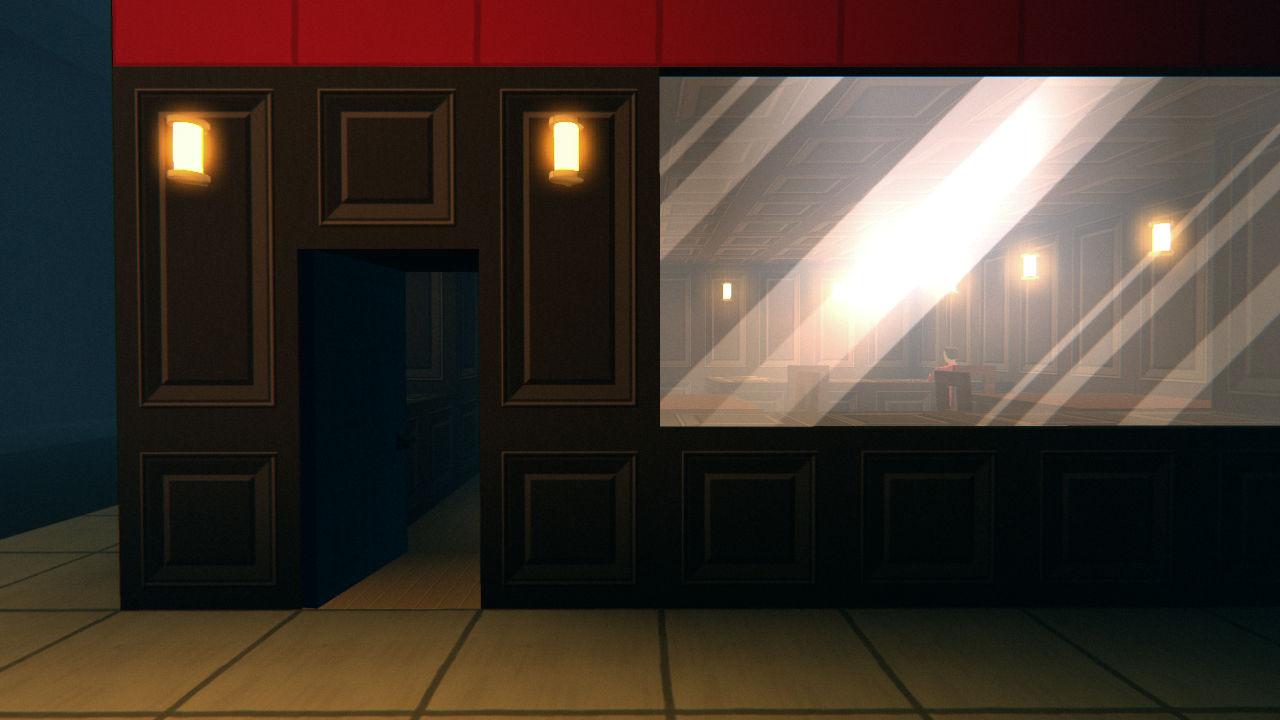 As this will likely be the last installment of the NEON STRUCT blog until 2015, I thought I’d do something different and review how I started making this game, what I have accomplished so far, and where I expect to go next year.

At the start of 2014, I had just finished the Mountains of Madness expansion for Eldritch and I was trying to figure out what to do next. I had two main game pitches among a handful of half-baked ideas: “Deos”, an open-world stealth game about surviving off the grid in a surveillance state; and “Neon”, a non-roguelike cyberpunk Eldritch spinoff. I spent a couple of days prototyping the barest bones of a city generator for Deos, but I had serious concerns about its scope and clarity. I chose to make the cyberpunk Eldritch game instead, and set up a Subversion repository called Neon.

By Mid-February, I was less enthusiastic about the idea of retreading the familiar ground of a first-person action game. I wanted to make something riskier and more meaningful than a reskinned version of a game I had just finished. A week later, I threw the entire design out and started fresh with the concept that would become NEON STRUCT. I wrote in my notes at that time:

It combines the best parts of Deos and Neon: Deos’s NSA story and all its survival/paranoia aspects, and Neon’s reuse of Eldritch tech and familiar core gameplay. And it resolves the problems I had with each concept in isolation: Deos’s narrative ambiguity and absent core gameplay, and Neon’s failure to innovate or be meaningful or exciting.

With a solid concept at last, I got to work. The early days of NEON STRUCT were focused on adding the core tech that would distinguish the game from Eldritch visually and mechanically: skyboxes, improved lighting, a conversation system, stealth AI behaviors. By the end of the month, the foundations were all in place and I began to hint at what I was making.

Eldritch turned out to be quite successful in the long run, but in the months immediately following its release, I thought a lot about how I could have done a far better job of marketing it. I decided not to wait so long to talk about my new game, and announced it in mid-April as Die Augen der Welt. (I’ve never been good at naming things.) Meanwhile, I was still building core player and AI systems, and plotting out the rough shape of the story and missions.

By now, I had a fairly convincing bunch of stealth gameplay but no real content, only a handful of test maps. The story and mission list were not yet final, but hardened enough that I felt could begin working on shipping levels. I gave myself one month to assemble a vertical slice comprising two stealth levels and one social space. I documented the process extensively on this blog, but was somewhat dishonest (with myself, even) about how much work remained to do on those levels, and what that would mean for the game’s schedule.

Following the vertical slice, I should have immediately reconsidered the scope and schedule of the game; but those lessons took some time to sink in. I spent most of June trucking along on the road I had already planned out, and while most of that work remains valuable, I lost more than a few days building out a level that I would eventually cut from the game. Working on a dull level was making me disheartened about the game in general, and my progress slowed.

I took a few weeks off from NEON STRUCT to prepare a big update for Eldritch and to give myself some time to reflect on the challenges of June. I returned with renewed excitement and a clearer vision of the game’s scope, cut the parts that weren’t working, and built a new level that I felt good about.

In August, I finally got to work on some of the most exciting level concepts from my initial plan. The nearly dead 1980s-esque mall level is an image I’d had in my head for years, and I was thrilled to finally find a place for it. And I made a weird dream sequence level, because I like it when video games throw weird curveball levels.

After the rush of blocking out some novel levels faded, my productivity declined again. I lost a lot of time moving to a new home, but I was also struggling to write increasingly complicated scripts in a verbose syntax that was never intended for such things. To improve my efficiency, I designed a simple scripting language that drastically reduced the lines of code required to implement most level scripting.

I realized around October that I should have a playtest/promo build ready sooner than my original schedule called for. I prioritized the first three levels of the game and spent most of the month building those to what I hoped would be a shippable state.

Playtest feedback is invaluable, and actionable negative feedback in particular is a very useful thing. It can also be soul-crushing. The response to the NEON STRUCT demo build was generally positive, but it overwhelmingly indicated that I was not nearly as close to finishing the game as I had hoped. Once again, I took some time off to pursue a side project and to absorb the lessons.

As I reflect on 2014, I feel surprisingly good about the progress I have made. It has been a long and sometimes difficult year; but despite a few setbacks, I am actually not far from my original schedule. NEON STRUCT is nearly end-to-end playable, and it will be finished and polished and hardened over the following months. I intentionally chose to tackle a risky game that demanded skills I had little experience with, and I have learned a lot by doing so.

So, what is in store for next year? In the short term, I intend to cut a trailer and announce NEON STRUCT‘s release date, but that means I need to be certain of the release date. It will be later than my original estimate of February, but should still arrive in the spring. I have a few post-launch features in mind (in particular, Steam Workshop support, pending a strong enough launch to justify it), but after that, there’s no telling what the future holds. 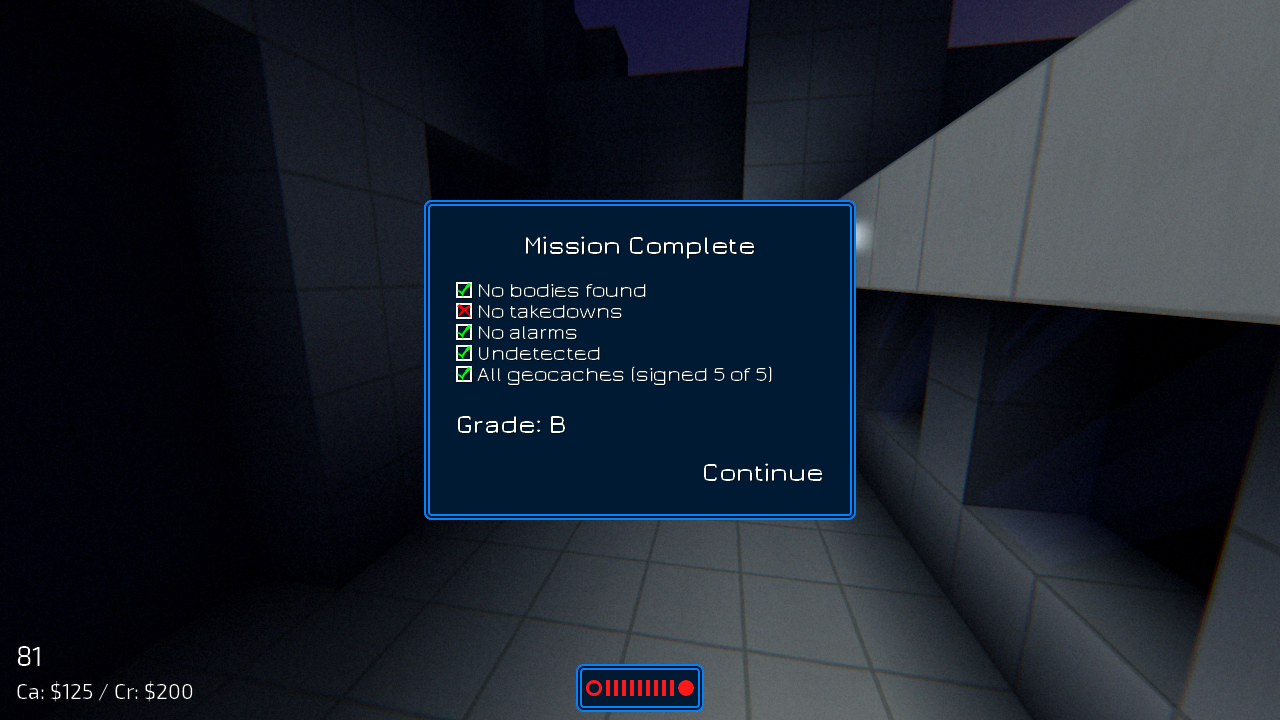 By popular request, I’ve added a mission results screen to NEON STRUCT. I had rejected the idea months ago, feeling it would break immersion. But many playtesters asked for something like this, and a couple of my favorite stealth/immersive sim games (Thief and Dishonored) do it, so I changed my mind. Unlike the open-ended play-it-your-way methodology of Eldritch, there is a prescribed playstyle here. Avoiding detection by enemies and forgoing any use of violence is strictly a tenser and more challenging experience, and I’m fine with the game treating it as the ideal way to play.

Right now, this screen is presented as a series of pass/fail marks and a final grade. I may add some more stats—how many bodies were found, etc.—but the grading system would likely remain based on these binary conditions because it’s easier to predict.

The mission results screen has a few other benefits. It reinforces pure stealth play in a way that would be tedious to do through narrative alone. It will keep me honest about every level being ghostable (able to be completed without being seen and without taking out any guards). And of course, it will be integrated with Steam achievements for players who like that sort of thing.